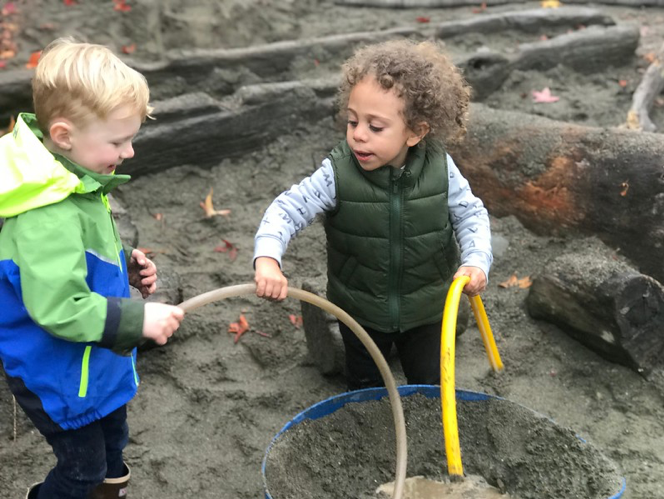 A few weeks ago, Raindrop Room (a Hilltop classroom of two-year-olds) took a walk along the canal trail – a long, paved pathway near our playground that we enjoy visiting. “Woa, the clouds are moving!” observed Nick, one of the Raindrop educators. He pointed to the sky. Several children looked up. “What makes the clouds move?” Nick asked the group.

A pause. “Trees,” said Rachel, one of the two-year-olds.

“Hmm,” said Nick, “Well, the trees are moving, and the clouds are moving – they’re moving together. So, what makes them both move?”

This is science, and these children are practicing their scientific thinking. I smiled and asked myself: Where are these ideas coming from? What experiences do these children have that support their theories? 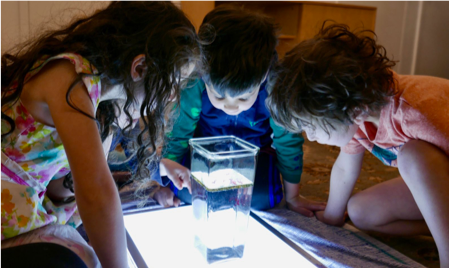 Well, I happen to know that’s not how it works, but our toddlers have not necessarily figured that out. For Rachel and Carly, trees and birds are their working explanations to describe the phenomenon of moving clouds. I suspect that if I had said, “No, the wind moves them both” (a simplified explanation, of course), they may have heard my words but not let go of their own working theories. Instead, they need to work through what’s wrong with their theories – a process that works best if they can figure that out for themselves – before they can let go of or expand their ideas to create new working theories. “Figure that out for themselves” does not mean they must do the work alone, rather that they must think for themselves to find holes in their working theory. For example, a child might test their theory by running an experiment, observe something that doesn’t align with their theory, or compare and evaluate theories with their peers.

This is the philosophy I learned while studying science teaching at the University of Washington, and I find it’s very applicable to toddlers. Of course, there are times when I do share my knowledge – teachable moments to keep kids safe (“hitting doesn’t work”), introduce vocabulary (“that fungus is called Witches’ Butter”), and the like. Often, however, I see value in not giving children the answer in order to support them in developing skills such as forming a hypothesis and connecting their experiences as reasoning. It also encourages children’s curiosity and creativity – I continue to be impressed by their theories and the connections they’re making from their own experiences.

As a science educator, my goal is not to teach children the “right” answer but instead to give them the tools they need to generate their own theories, and then test their ideas for logic, validity, and accuracy. With Rachel and Carly, I hope to revisit their ideas about what makes clouds move in the coming weeks. The next time I’m outside with Rachel and Carly and see moving clouds, I plan on asking again, “What makes the clouds move?” I’m curious to see whether they continue to stand by their working theories or whether they have new ideas. I will also ask other children in the class to share their ideas. Depending on their responses, I may support children in comparing their theories, or I may shift the discussion to focus on one piece of the puzzle, like “What are clouds made of?” While there are many directions that the discussion may go, my ultimate goal is to help the children dig deeper into their thinking and reasoning.

Megan is an educator with 2- to 3-year-olds at Hilltop Children’s Center, where she has worked since 2017.