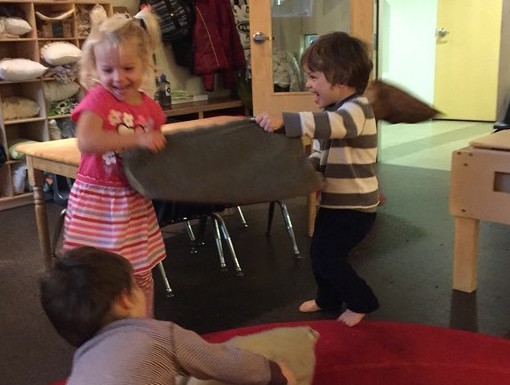 What do children learn through physical play?

Physical play, or physical endeavors in any form, have long been undervalued. In Seattle schools, educators had to fight to keep policy makers from cutting recess altogether. Studies have been done about the importance of physical activities for all age groups, how it improves brain function and boosts serotonin, which contributes to wellbeing. What skills can a young child specifically gain from physical play, and how, when, and why should we encourage it?

Young children are drawn to wrestling, jumping, tumbling, running, and many other forms of physical play. Some of this play can seem risky, or tricky to manage, and parents or early childhood educators may wish to suppress it. However, there are many benefits children gain from these types of play. By working with the children to lay out simple ground rules, you can add a layer of learning to physical play that includes an understanding of risk, and the practice of empathy, in keeping each other safe, and adjusting to each other’s needs.

I begin with an example that is among the most challenging. Working with children to learn safe wrestling is an illustration of how, just as with purely intellectual endeavors, degree of difficulty can align with degree of benefits. I’ll discuss further examples of other types of physical play in future posts.

[box] How to build a culture of safe wrestling

In our classroom, the children clearly want to wrestle, and we want to give them that chance. To prepare, we needed to talk about how to be safe, and what our agreements were about wrestling. Audrey, Devin, Zaylen, Micah, and Alisha gathered with me on the red rug to talk.

Bria: I want to make sure we are safe when we wrestle. What do you think we should do to be safe? What agreements should we make about wrestling? Any ideas? Where could we wrestle?

Alisha: On the red rug!

Bria: On the red rug. Should we put any pillows down?

Bria: You want some pillows?

Bria: Should we pull each other’s hair when we wrestle?

Bria: Can we grab each other’s necks when we wrestle?

Bria: If a kid says, “STOP!” should we keep wrestling?

Bria: What should we do?

Bria: Can we grab each other’s bodies when we wrestle?

Bria: No? We can’t grab bodies?

Micah: We can grab bodies!

Bria: Yeah. We can grab bodies, and arms. Is there anything else we need to think about to keep our bodies safe while we are wrestle?

Bria: Should we ask each other before we wrestle?

Devin: Can I wrestle with you?

Bria: That’s a good way to ask, and you can wrestle with me, but we are going to wait for Alisha to be done first. Okay, let’s put the pillows down the way we want them, then we can wrestle.

Alisha: Can I wrestle with you?

Bria: Alisha, that was a great way to ask.

Zaylen: Can I wrestle with you?

Audrey grabbed Alisha’s feet and gently pulled her around. They were both laughing and wrestling happily. After a few minutes, Alisha said, “That’s enough, that’s enough,” and Audrey immediately let go of her. I told Audrey “You heard her message about being done, and you let go right away. Good job taking care of your friend.”

For the first few minutes, there was a chorus of “Can I wrestle with you?” Followed by either” Yes!” or “No.” They were very good at recognizing one another’s feelings and needs, and checking-in before they wrestled. As I watched this unfold, I wondered if having them ask before engaging was changing the way they approached wrestling. Was too much time spent asking? Did it diffuse the situation in a positive way, or a negative way? How could this be accomplished without having to constantly check-in with each other and ask, “Can I wrestle with you?” over and over again?

When we began, the children were skeptical. After all that talk about agreements and what we could and could not do, they had a hard time launching themselves into wrestling. This made me think, is wrestling something that comes up on impulse? Something that is only fun when it isn’t set up? How did they feel about laying out grounds rules for wrestling? Did that affect the purpose and draw of wrestling?

Eventually, they really got into it. At this point they weren’t asking each other as often if they wanted to wrestle, but they still paid close attention to when a child asked them to stop, or said they didn’t want to do something. The children also used the pillows to wrestle with one another. They picked up pillows and threw them at each other, or used them to ram into one another. This made it easy to use a lot of energy and force with their bodies, while having a soft cushion to protect them from getting hurt. We also did some piling and tumbling, and were always careful to listen to see if anyone wanted to stop.

They did a great job listening to one another’s messages, and recognizing one another’s needs, while finding ways to have fun while wrestling. They were wary and unsure at first, but got into the process after a few minutes, and everyone had fun. I wonder how this will evolve and change as we continue to build a culture around safe wrestling? [/box]

Physical play develops empathy. Physical play entails navigating conflict, taking turns, being careful of one another’s bodies, checking to see what another child needs, and if a playmate is okay. If a playmate does get hurt, a child can learn to be more careful, for example, how to safely navigate space.

Physical play develops confidence. Children are excited and proud when they complete physical goals or challenges. Physical play can lead to tangible physical accomplishments that help children to develop confidence in their abilities. Children encourage and support one another in their physical activities and accomplishments. Physical challenges can be difficult or scary. Children grow as they push themselves, and learn important life skills as they navigate failure and success.

Physical play develops self-regulation. Physical play gives children the chance to practice regulating impulses, and approaching play in a safe and fun way. These situations also challenge them to regulate their own space, to develop their spatial awareness, knowledge of their own bodies, and awareness of the needs and space of others.

As you consider these ideas, and how to implement physical play in your own classroom or with your own children, reflect on these questions: What other development occurs during physical play? What are some of the challenges you experience as an educator when scaffolding physical play?

In future posts, I will tackle different aspects of physical play and through stories, research, articles, and my own reflections, I will explain the benefits and challenges involved in this type of play. Be on the lookout for my future posts on yoga, jumping, and martial arts.