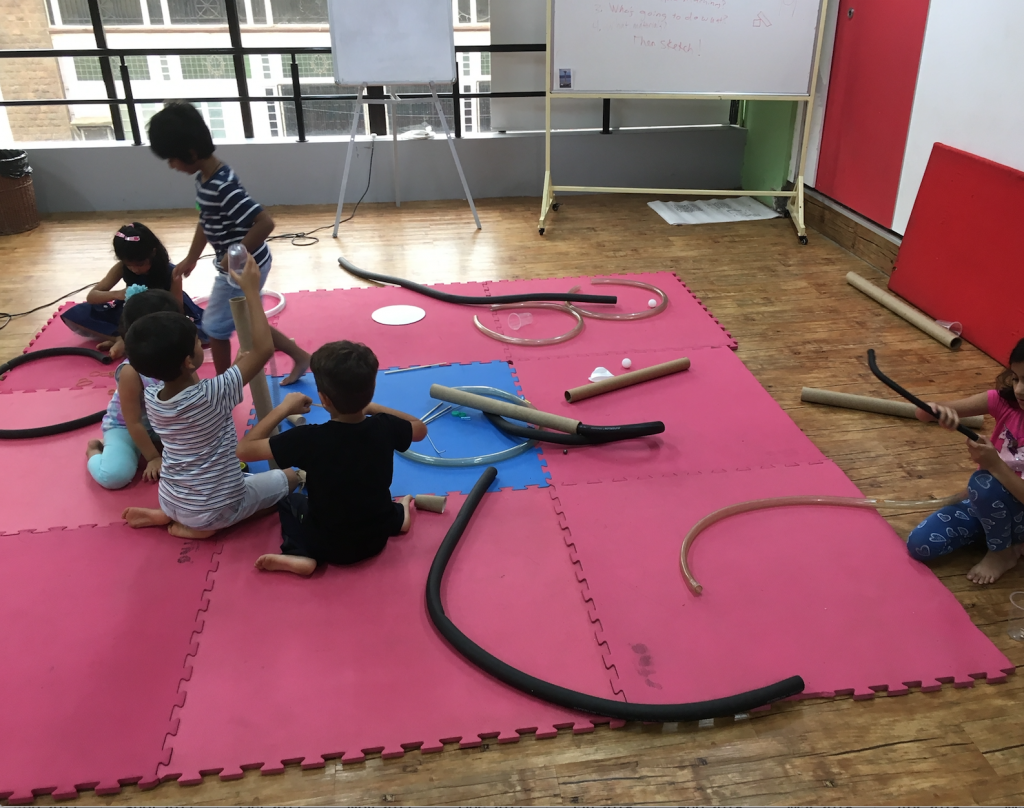 Please enjoy this “field report” from Hilltop toddler educator Nick Terrones, who is spending one month teaching in Mumbai, India, through the Expanding Minds Program.

Not sure where to begin… except that its hot and humid out here – 98 degrees, with 98% humidity and feels like 105!

Being in India has been quite eye-opening. One thing that I have taken away, and that has touched my heart is the idea of relationships. I’m not sure what it is exactly, but even being on the other side of the world, quite literally, makes human connection important. Maybe many of you have experienced this because you have traveled the world, but this is the first time I have been this far away from home…for this long. Making relationships has been a key part of my life, I now realize, and it has been very apparent on this trip. 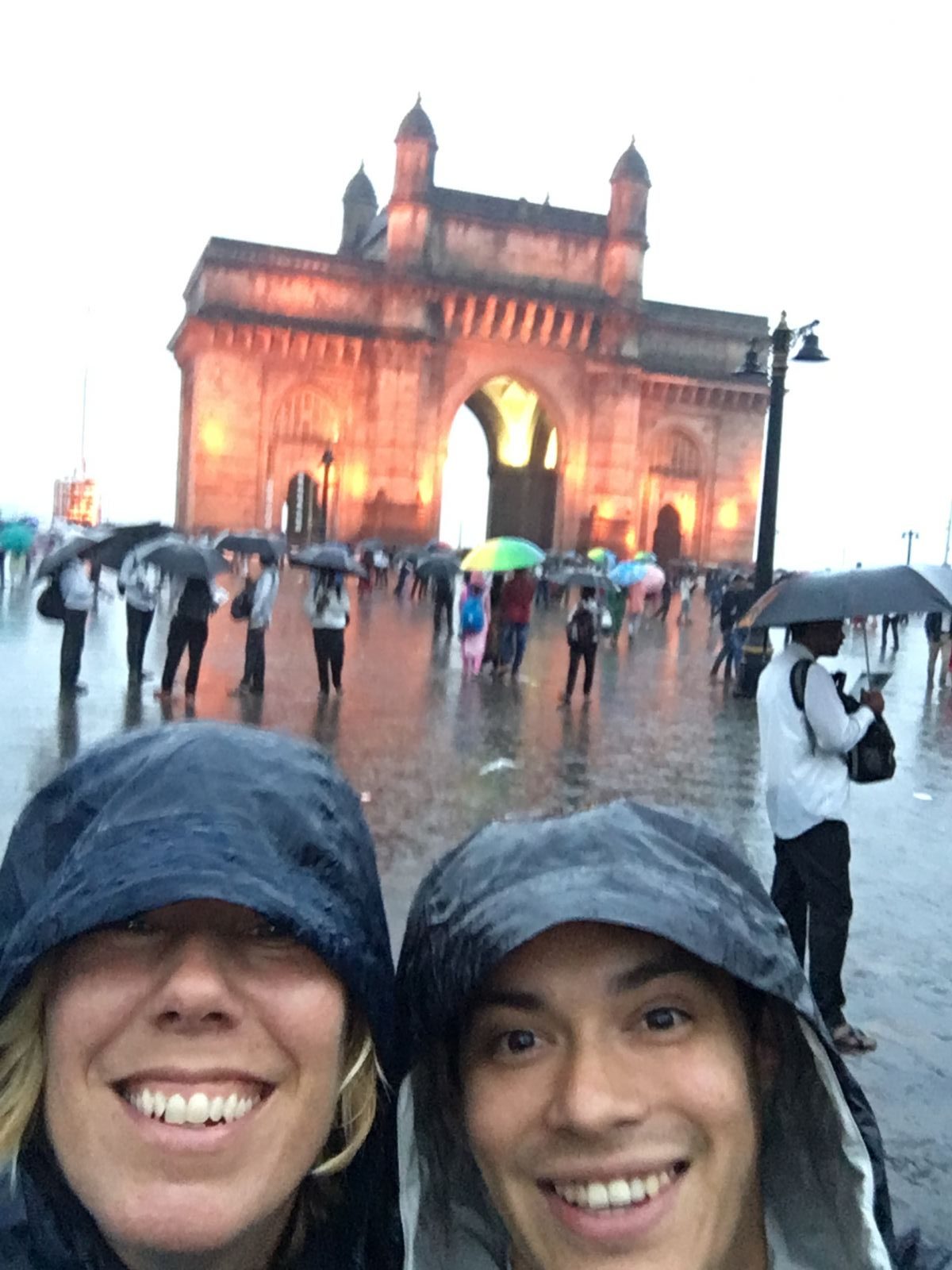 Fortunately, I am with Sandra Floyd, an exceptional educator (from Epiphany Early Learning Preschool, in Seattle) who taught at Hilltop for a long time, and has been someone influential in my professional and personal life. We seamlessly picked up from our time together in the Mountain Room and have been a force to be reckoned with out here in Mumbai. We’ve curated relationships with children we do not know, and those children have asked us time and time again if we’ll be back again next year. We hope so. After settling in and getting over our jet lag, we had to hit the ground running, and it’s been ‘chaotic and fast paced’ since. I put little apostrophes because our careers there in the good ‘ol USofA are ALWAYS THAT WAY!!!! Here in India, at least in Mumbai, one of the more progressive cities in India, it is expected for educators to have hired help. These people that are hired help do all the nitty gritty things that back home we usually do for ourselves. For example, if I wanted to move a table I’d get waved away and a team of people would do it! Literally a team of 2 or 3! Even when I want to pour myself a cup of chai tea, I get waved away so that someone can do it for me. The idea of having help is foreign to us…yes that is meant to be a pun. But, it’s here and we have to accept it. For us back home, having extra help is a luxury, and here it is an expectation. From talking with many people here, families, other educators, and even vendors on the street, it appears they have a high regard for educators; “everyone here is in the tech business. But to meet a teacher, say out in a bar or restaurant, is much more interesting.”

Another startling thing that we’ve been experiencing is how much respect we get from the children. Not that Seattle children do not give us respect, but they do not call me ‘sir’ as a default. This has actually been hard for me; I do not like a child saying “Sir, can I drink water” or “Sir, can I go to the washroom” It is also hard for the children to think for themselves, not in a bad way, but education is something to accomplish rather than experience. I say it like this because this is how I see the role and relationship of education in our country, or at least what we’re trying to accomplish at Hilltop and through the Hilltop Educator Institute. Product over process is important here in Mumbai, and that’s sort of the reason the program we’re working with exists. It’s called the Expanding Minds Program, and the idea is to show families, wealthy ones, that learning is more than memorizing, and teaching is more than a rote process. 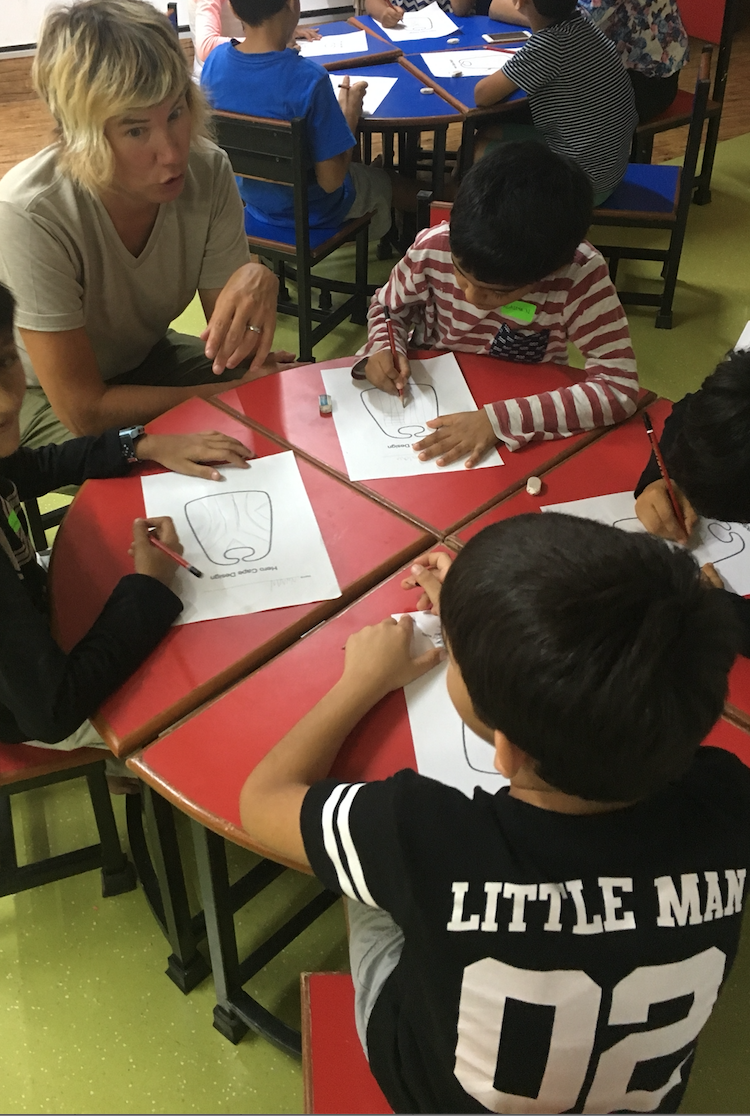 At the end of each week, families come in and we show them what we’ve been working on. Week One was centered around Superheroes, and it was our task to show the children that they too can be heroes or at least perform everyday acts that are heroic. The children created their own superhero characters with powers aimed to help people and the world. They created their own masks and capes that complemented their heroes. When asking these children what their powers would be, many answers were centered around the environment. Interestingly enough, just before we arrived, India as a whole banned plastic bags, and there are many murals throughout Mumbai that are obviously painted by older children about ‘saving the earth,’ and ‘stop throwing trash in the ocean.’ When asked to think beyond the environment and think about something that they are not ok with, the answers got heavier:

For many of the Indian families here, we’ve really emphasized what we know about child development, that all this play and art and creativity is actually great for their developing minds, and that they have been strengthening their empathetic capacities. This was the same for Week Two as well. In Week Two we explored games, and the children were expected to create their own games, develop rules for the games, and even make something called “unboxing videos.” We’re about to embark on week three, where we will be exploring Rube Goldberg Machines, and as you might have guessed, children will be making some of their own simple machines. 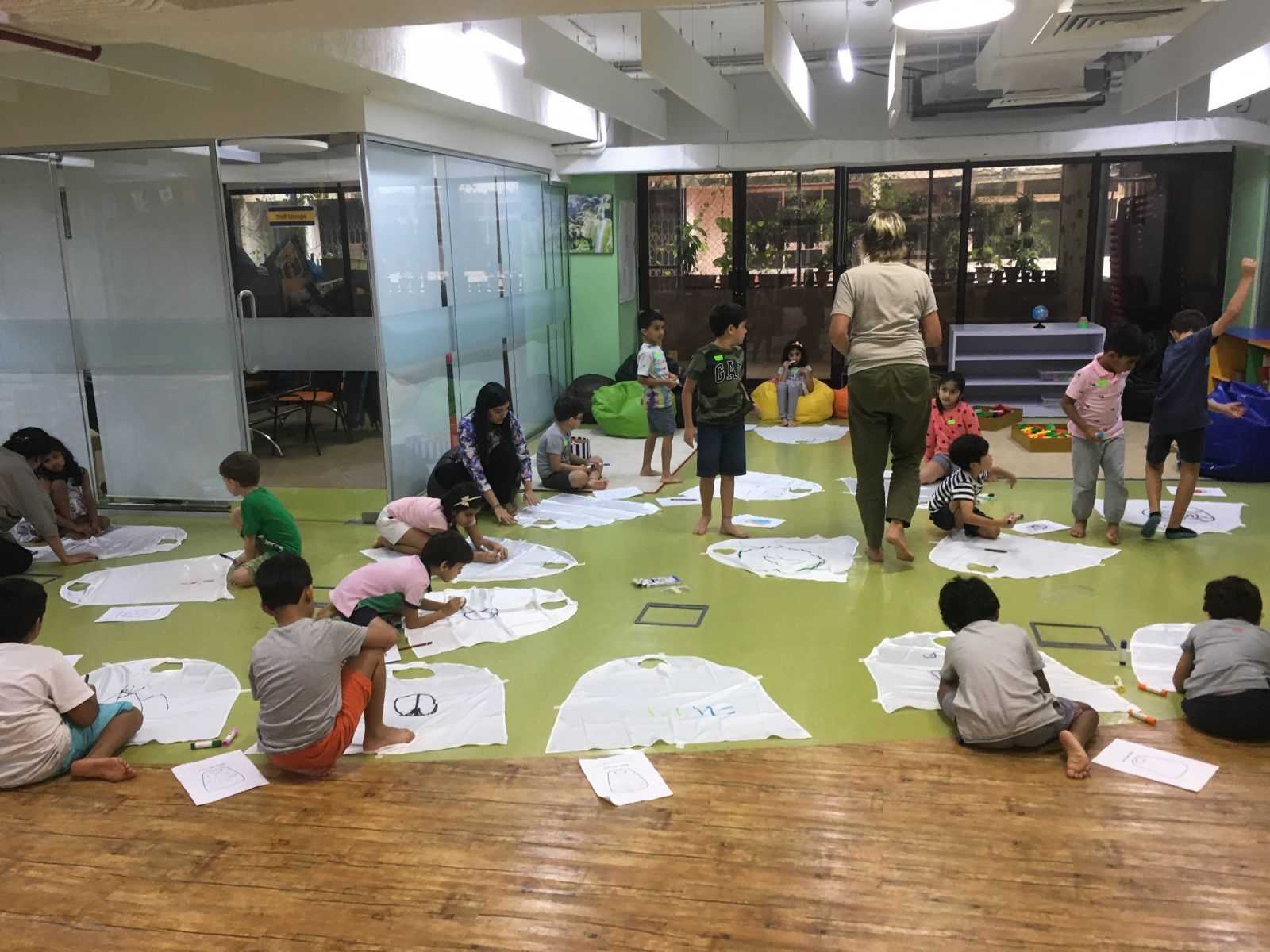 I am also seeing that race and privilege may not necessarily be connected, here in India. What remains true is that humans continue to keep each other down and fixed into positions for economic power.  India, as we know, has a particular system of economic class, but apparently what we’ve seen isn’t even the worst of it. I have appreciated that many of the families involved in this program want their children to learn to think outside of the box, to learn to consider perspectives that they may never experience outside of their class, and to recognize that they too could influence change because of the privileges that they have. Being here has made me feel assured that at Hilltop we are encouraging children to utilize their privilege in ways that will benefit society, not just our nation, but our human-society. So, when we throw around the word ‘privilege’ let us consider the process of it, not just the word as a pejorative. What are you going to do with your privilege? Because having privilege is not bad. JUST DO SOMETHING WITH IT!!!

I truly miss home, my family, and my class at Hilltop, and I am grateful to exercise the privilege I have, and have accumulated, in a positive way.

*Please note, reference in this blog to any specific commercial product, process, or service, is for the information and convenience of the public, and does not constitute endorsement, recommendation, or favoring by Hilltop Children’s Center nor it’s staff.*