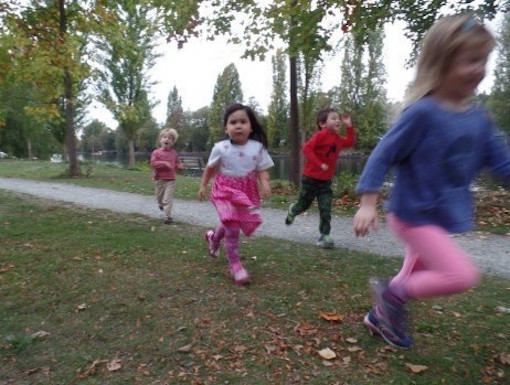 In my classroom, I used to think of taking a “first group” of children outside at 3:45 as a benefit mainly to the children who remained in the classroom: more time one-on-one with my co-teacher, more opportunities for focused work, or a space for quiet play in a smaller group. Over the past year, however, I’ve come to realize that this small scheduling decision not only benefits those children who get extra quiet time in the classroom, but is also deeply important for the children with whom I enter into the wild. 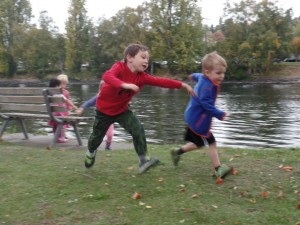 Every afternoon, a co-teacher and I take a small group of the Mountain Room children (ages 3-5) outside for thirty minutes of unstructured play and exploration along the ship canal trail. This trail runs parallel to our school, and is an important component of the ecological identity of our neighborhood: in summer, we peek through the play yard fence as the large sail boats and cruise ships slowly float by between Salmon Bay and Lake Union; the autumn brings opportunities to notice the vibrant changes of the leaves, while winter and spring provide us with puddles for jumping in and cool breezes to carry the children along as they pretend to fly through the grass.

During our time on the canal, I take on the role of participant observer, both engaging with the children but also watching their interactions and curiosities unfold. While every group of children brings their own unique learning styles, interests, and wonderings to this space, I’ve observed that many of the children’s experiences on the canal over the past few years carry the themes of imaginative play, engagement with the community, expression of the self, and exploration of the natural world. 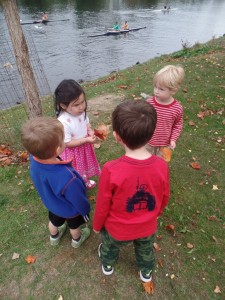 A recent afternoon illustrates what these themes look like in action. As we arrived to our usual corner of the canal path, surrounded by grass, trees, rocks, and water, three of the children jumped straight into a chasing game, one that involved “monsters and bad guys” as the chasers and inspired much bounding and sprinting through the grass; occasionally, the children stopped running to wave to the college crew team rowing by on the canal, or to watch the dog-walkers and runners pass by us on the path. Meanwhile, the other two children in my group had become captivated by a colorful pile of leaves that had accumulated underneath a nearby oak tree. As the assistant teacher and I leaned in closer to their play, we overhead these two children re-creating a familiar “family” scene with the leaves: “This is where the grandparents and the uncles and all the children who speak Chinese live,” said one child, who is of Chinese and Native Alaskan descent and very close to her grandparents and extended family. The other child continued to name some of the leaves as “mom,” “dad,” and “baby,” explaining that the crumpled-looking leaves were the family members who were “sick.” After a few moments of this play, the pitter-patter of raindrops began to gently fall upon us, and the two children moved from sitting with the leaves to running alongside those involved in the chase game. When I asked if they had decided to play chase instead, one of them explained, “We’re playing big thunder…we have to run from it!” 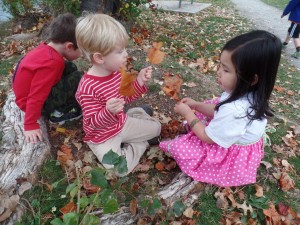 I believe that these experiences are incredibly valuable in that they connect the children to their community beyond the school doors, to the wonder of the natural world, and to their inner lives. Richard Louv describes the healing power of nature and the opportunities it provides for risk-taking, independence, and freedom in his 2008 book, Last Child in the Woods. He describes fondly his own (and an earlier generation’s) memories of a childhood spent in the outdoors, and illustrates how society’s recent shift in the past twenty-five years towards technology and productivity has created both a more sedentary and distracted culture. Louv argues that “the challenge of nature” not only engages all of children’s physical abilities and senses, but may also help them build “instinctual confidence:” the ability to take appropriate risks while honing their own abilities to avoid real danger.  According to Sebastiano Santostefano, director of the institute & online journal, Massachusetts Psychologist, nature even has the power to “shape the psyche” and provide children a tool through which to process both minor and major life events:

“The point is obvious: children interpret and give meaning to a piece of landscape, and the same piece can be interpreted differently…if you use traditional puppets and games, there are limits…but with landscape, it’s much more engaging, and you’re giving the children ways of expressing what’s within.” 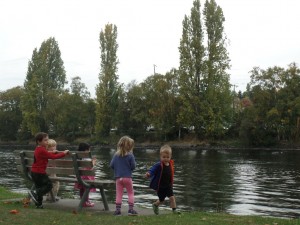 As I reflect on the experience I described from that afternoon on the canal, I’m struck by the depth of the children’s exploration and expression…a game of chase becomes an exploration of morality (“good versus evil”), while a pile of leaves serves as an opportunity for acting out family relationships; a change in the weather prompts an exploration of something “scary” (thunder) and offers up a way of processing the emotions that come with it.

If this all sounds pretty deep, that’s because it is. Nature not only provides an inspiring space for creative, dramatic, and physical play, but also serves as a conduit through which children can process and understand their world. Experiences outdoors connect children (and the adults who join them there) to their inner lives, their spiritual wonderings, and their deepest capabilities for exploring and engaging in the world around them.

[author] [author_image timthumb=’on’]https://hilltopcc.com/wp-content/uploads/2014/12/IMG_0394.jpg[/author_image] [author_info]Becky Krueger is an educator with 3- to 5-year-olds at Hilltop Children’s Center, where she has worked since 2012.[/author_info] [/author]