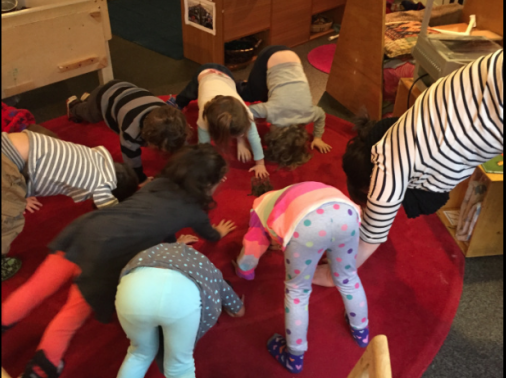 I don’t meditate, but I want to be the type of person that does.  As a classroom teacher of three-year-olds, I’ve looked for ways to help the group calm down, connect with their bodies, and learn self-soothing skills. Anyone that’s visited a preschool classroom will attest to the singular chaotic energy that comes with young children.  We find that strategies that are both quick and calming are needed at transitional times, or any time they may need a bit of a reprieve from the chaos of play.  But how to get a three-year-old to meditate?  Especially when I’m not a practitioner myself?

I know that there are people who practice yoga themselves and share some of those skills with children in their class. And there are several well-developed curricula out there for teaching mindfulness to children (such as Goldie Hawn’s MindUp program). But I wanted to see what I could figure out just by starting some breathing work with the toddlers in my class. 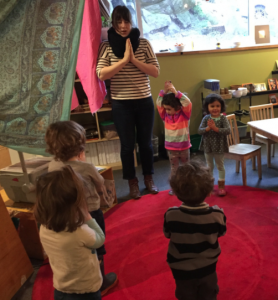 Considering the point of mindfulness and meditation, I thought about my goals.  First, it wasn’t to force the children to sit silently for long periods of time, on the contrary, I wanted it to involve movement as a way to reconnect with their bodies.  The first place I started was with the children at one of our daily meetings.  I asked them to sit down, and put a hand on their belly.  Breathing in deeply, I asked them to feel their belly fill with air, alerting them to the process of breathing and the effect it had on their bodies.  As the children gained comfort with this practice, I added in another idea, further illustrating the act of breathing.  Standing up at their spots, I said “Fill your belly with air and float up to the sky like a balloon!” I showed the children by breathing in deeply and lifting my arms up toward the ceiling.  “Now push all of your air out and float down to the floor, balloons” I showed the children how I blew my air out dramatically and bent down slowly to touch my shoes, and they followed suit.  Finally, I asked the children to sit on their knees and once again put their hands on their bellies.  “Let’s do a big lion breath” I said, opening my mouth wide, sticking my tongue out and making a huge roar as I pushed the air out of my lungs.  The children followed along-“RAAAAAAAR!”

Although it sounds like a silly game, the children really are taking in the intentions of mindfulness, bringing recognition to the body and the way they’re breathing.  As we do these activities I try to narrate the ways it makes me feel: “When I bend down and touch my shoes it stretches my back and my legs.  It feels good after we played outside for so long!”  My goal is to call attention to the way that I use stretching and breathing as a way to care for my body, recognizing the ways that exercising can put a strain on it or ramp up my mood.

Since this practice has been put in place, I’ve seen the children suggest it for meeting times, as well as using these ideas individually. This has taken the form of inhaling deep breaths on our way inside from the playground, instigated by children as often as by teachers. It’s also been seen in self-soothing strategies that the children use when they’re tired, upset, or winding down before nap time. This has looked like laying on the couch and stretching their body as long as they could. We’ve also seen children doing yoga on their mats together, showing their skills in downward dog, cat/cow pose, and child’s pose.

Are there any points throughout the day where you see your child independently using mindfulness strategies? Or, are there points where you feel your child could benefit from mindfulness strategies? I encourage you to test out these ideas, even if it’s just for ten seconds in the car on your way in to school. Children and adults alike stand to gain from this practice.

[author] [author_image timthumb=’on’]https://hilltopcc.com/wp-content/uploads/2014/12/Cassie.jpg[/author_image] [author_info]Cassie Tondreau is an Educator with two- and three-year-olds at Hilltop Children’s Center, where she has worked since 2011.[/author_info] [/author]