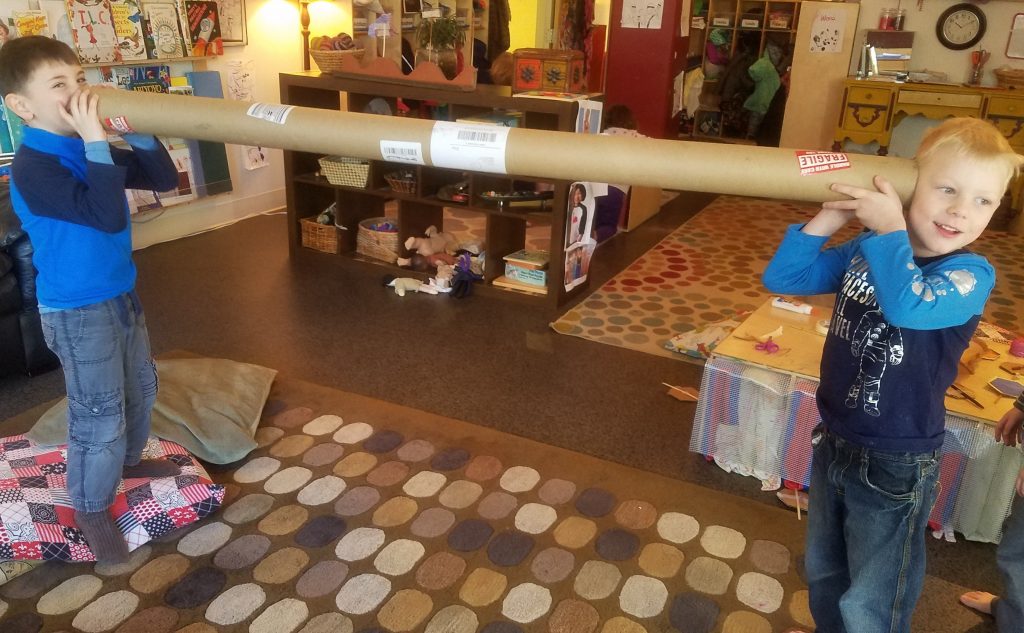 It’s the Thursday of the week before our winter break. Ben has been floundering through it, because his best friend, Grayson, left for vacation a week early. Ben hasn’t spent much time investing in other relationships, so this week without Grayson has been a big experiment for him, to figure some other kids out. 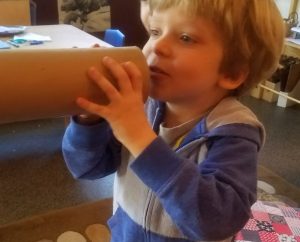 Ben picks up a long cardboard tube that other players had been using as a tunnel for cars, now abandoned. He puts his mouth to one end and begins to holler. Antonio is immediately attracted to this idea and picks up the other end, placing it on his ear. Ben yells and shrieks into the tube. “Too loud,” Antonio tells him. In slightly less piercing tones, Ben tries again. Success! They start to take turns, one child with the tube to their ear, the other making noises into the tube.

“I want a turn!” The noisy game has also grabbed Robbie’s attention. He puts the tube to his ear; Ben obliges with plenty of yelling. They also begin to take turns sharing muffled yells, screams, and laughs. Soon, I hear Ben say it again:

“You’re my best friend after Grayson.”

This time, he gets a real response from Robbie.

“Okay, but sometimes you do mean things to me.”

It’s true: Ben has been known to have big physical reactions when upset, with real screams, real yells, real hits and scratching. And Robbie has had similar reactions when he’s upset. With no visible change in body language or facial expression, Ben doesn’t seem surprised by Robbie’s response at all. Or upset. He says:

Then, Ben drops the tube and walks away. I can’t quite pick up what he’s feeling. His shoulders are a bit hunched, no smile on his face but no scowl either. Melancholy? Rejected? Emotionally drained? Accomplished? He seems okay, but also like he wants some space. We give it to him. Sometimes, the most supportive action is to take no action at all.

I came away from this interaction with so many questions. Up next was a week-long break. What would happen when we came back together– would these children remember this interaction? Would they follow up? Would Ben still be open to connecting with other children once he and Grayson were reunited? What could I do as their teacher to support these steps towards new friendships? 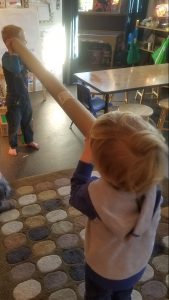 On a more macro scale, I wondered about how often I have interfered with the blossoming of moments like these. I am not immune to shutting down a noisy or rambunctious game – which can make sense at times for safety or community needs, or for skill-building around self-regulation. But how often have I done it because I just don’t want the noise? Was it an intentional choice, based on reflective and thoughtful observation of my students and the environment? Or a reaction rooted in my own insecurities? How often have I quieted a game because I’m worried about someone else judging the tone of my classroom, or my skills as a teacher? Will they think I’m a bad teacher if they hear children yelling? 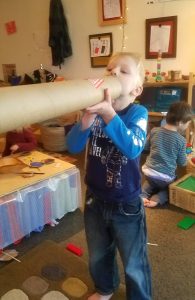 After that exchange between Ben, Antonio, and Robbie, I realized I felt proud of how they handled the whole thing, and it was all on their own. I also realized I felt proud of how we as their teachers had fostered those skills of self-advocacy (“too loud”), social risk-taking (“you’re my best friend…”), and clear, honest communication (“you do mean things to me”) in our students. I appreciated their engagement with the materials and each other. I was grateful for their buy-in and ownership of the space, their bodies, their needs, and their feelings. I was impressed with how they took care of each other, as well.

Is a good classroom a quiet one? One where the children are still, and focused on their individual tasks?  Who makes the choices for children in a good classroom? Do we count it as a “learning opportunity” when a child is engaged without teacher guidance? Can “engagement” include loud play? We may want to answer “of course!” but are we comfortable with the personalization, the gray area, the lack of standardization that implies? What kind of training and support do we teachers need, to trust our children more to follow their needs and instincts? 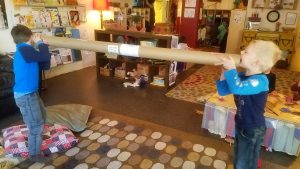 I would argue that a good and healthy classroom must be noisy with children connecting, engaging, playing. Children are messy. Emotions are messy. In the end, we want children to get in that mess. Where else are they going to get to practice those skills of self-advocacy, social risk-taking, and honest communication? We are supporting and loving our kids into the next phase in their lives, and we will do everything we can to set them up with the real skills they will need to be successful – including letting it get loud!

Epilogue: Since the break, we have seen Ben capitalize on these new connections, and have more success with a wider variety of play-partners. He and Antonio have been building a friendship and do play together, though Grayson continues to be Ben’s go-to. Ben and Robbie continue to challenge each other, two strong personalities clashing, but have found common ground at times. The tubes have returned to their role as tunnels, for now. It may be time to bring out the cans and strings…

[author] [author_image timthumb=’on’]https://hilltopcc.com/wp-content/uploads/2014/12/IMG_2417.jpg[/author_image] [author_info]Chelsea Myers is an educator with 3- to 5-year-olds at Hilltop Children’s Center, where she has worked since 2014.[/author_info] [/author]